by Bunker Kings 0 comments
We headed out to Skirmish Paintball for the world's largest scenario game "Invasion of Normandy". I've played a few scenario games in my day, but nothing compares to this one! We showed up on Tuesday morning to get our booth set up for the event and people were already there setting up their tents, mowing their areas, and literally having a blast! The next two days as we set up our massive and always epic booth we are greeted by so many amazing recreational players who praised our products as well as our event booth. Friday rolls around and we open up for purchases, not realizing we should have probably started taking in customers Thursday, but no big deal the amount of foot traffic through the booth is just insane! Then Skirmish kicks off "Castle Battles" which is a 3 hour warm-up on Friday to get the players out there playing and warmed up for the big battle Saturday. 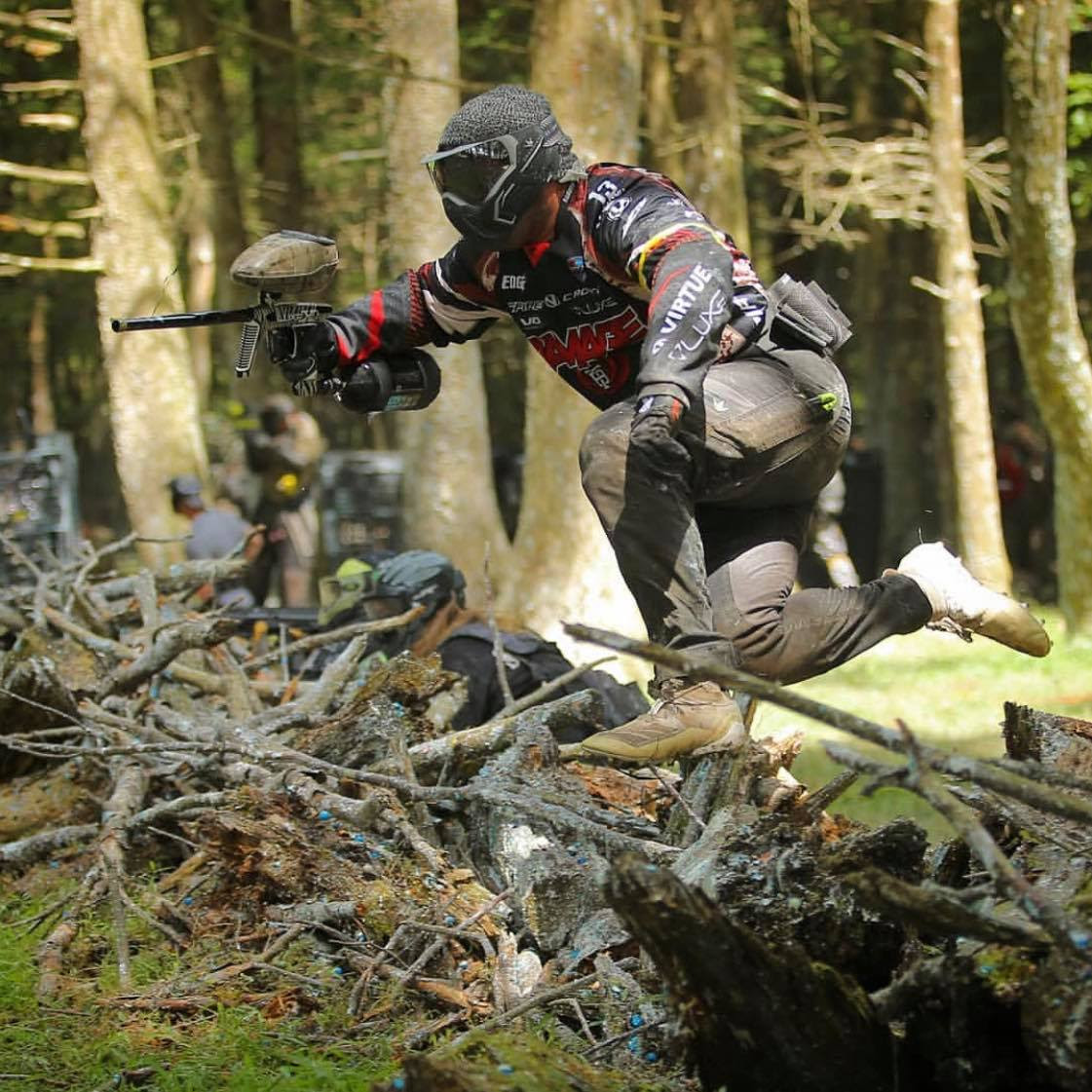 Saturday morning I assumed we would not get to play too much with the number of people that were coming and going through the booth, however, we made it out there just in time to play the opening battle! Talk about insane amounts of paint being shot all at one time, I don't know if I have ever seen paint actually blind out sunlight until now and as if that wasn't enough the opposing team threw enough smoke grenades to make it impossible to even see the back of your loader while shooting. The initial battle was extremely fun, I honestly couldn't even count the number of people I got to shoot with my loader and 9 pods especially after finding a perfect wall with a window overlooking the center of the beach that they had to rush. After running out of paint we called it a day and walked back to the booth to continue working, after a few hours of work we decided it was time to go "hunt" some more. We headed back out with Chris Williams, his son Oliver, and Ludo our videographer all strapped with gear and tons of pods to shoot some more people. We finish out the day fighting our way from the woods and onto the beach where we eventually ran out of paint again and left the field. The rest of the day we stayed in the booth talking and teaching all of the recreational players about the gear. We realized at this point that unless we actually sealed up the doors, people would just keep coming in, so we ended up leaving the field around 10 pm! Aaron Ormrod and I decided sleep was overrated and we binge-watched the entire 3rd series of Stranger Things.

Sunday Morning we headed to the field early, making a pit stop to grab some much-needed caffeine. I definitely thought that we were working straight through the day and not playing at all, but Chris had other plans in mind. He said suit up and let's go play and shoot some video and photos. Realizing that meant that I was going to be playing out there without them I made sure to load up at least 9 pods and a full hopper so I could hold it down seeing how the "Axis" team which was my team was just getting dominated all game.

I head out and get on the field and Chris tells me to just go play but look sweet so we can get some photos and videos. Well nothing is more fun than getting close to the other team in a scenario game because now you have to avoid being shot by them and well your team, while also listening to the loud annoying guy with the megaphone 200 feet away in the back of the line yelling at you and everyone else to move forward. So I find myself way up in the front of our team, and every bunker I go to I can literally see the opposing team moving past me on both sides and they have clear shots on me. After shooting most of them out, I see a bunker ahead of me that I'd have to jump over mine to get to, and once I get there I'd have to shoot a few dozen people and move from this spray trap cube bunker into a pile of sticks that actually has protection from the front and one side. Making all of the right moves, avoiding most friendly fire, and reaching the destination bunker I was pleased to see all of the available shots on the opposing team. After one balling the same few guys over and over, I decided they deserved a few extra shots :-). Once I got down to my last 40-50 paintballs I strategically retreated back to my starting position and convinced people to make that same move forward, after watching all of them fail I laughed and left the field.

Needless to say, that weekend was one of my favorite moments in paintball, and I highly recommend that all paintball players regardless of skill level should try to play some form of recreational games. Oh yeah, and if you are going to play in the woods use bug spray that also is made for ticks! I played the whole weekend and stayed tick free!
Share
Older Post
Newer Post
Close